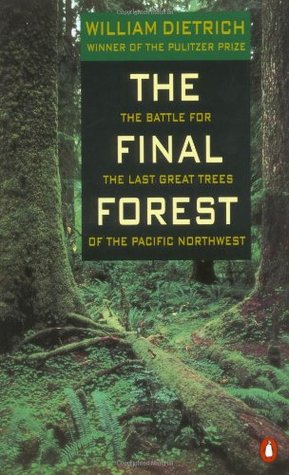 The Natural History Society book club will meet at 3:30 pm on Monday, April 27 to discuss The Final Forest, by William Dietrich.

For location and RSVPs, please contact Pat at jltnatural@saveland.org

The local battle scene of this book’s subtitle is Washington’s Olympic Peninsula, but the conflict raged, and still rages, over the entire Pacific Northwest, Washington, D.C., Alaska, and other locales that face the dilemma of preserving natural resources versus exploiting them. Dietrich, a Pulitzer Prize-winning journalist, presents in an easy-to-read narrative style the point of view of various participants in this war, from the logger whose way of life is threatened to a biologist concerned with saving the Northern spotted owl. No easy solutions to the struggle between the forest industry and environmentalists emerge from this book, but hopeful signs include the increasing awareness on the part of Forest Service personnel and the logging industry that careless, sometimes ruthless, exploitation of the remaining old growth forest is no longer feasible or even possible.  Before Forks, a small town on Washington’s Olympic Peninsula, became famous as the location for Stephenie Meyer’s Twilight book series, it was the self-proclaimed “Logging Capital of the World” and ground zero in a regional conflict over the fate of old-growth forests. Since Pulitzer Prize-winning journalist William Dietrich first published The Final Forest in 1992, logging in Forks has given way to tourism, but even with its new fame, Forks is still a home to loggers and others who make their living from the surrounding forests. The new edition recounts how forest policy and practices have changed since the early 1990s and also tells us what has happened in Forks and where the actors who were so important to the timber wars are now.

William Dietrich, a former science writer for the Seattle Times, is the author of Northwest Passage: The Great Columbia River and Natural Grace: The Charm, Wonder, and Lessons of Pacific Northwest Animals and Plants, as well as popular fiction.Winner of the Pacific Northwest Booksellers Association Award