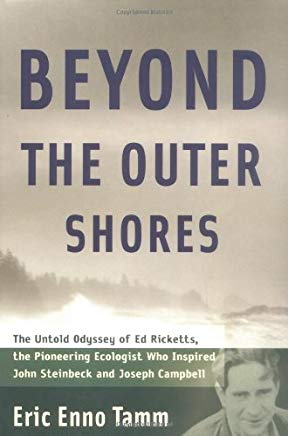 The JLT Natural History Society book club will read Beyond the Outer Shores by Eric Enno Tamm in April 2019.  We will meet on Monday, April 22, at the Charles Pink House next to the Port Townsend Carnegie Library 3:30-5:00.

Beyond the Outer Shores: The Untold Odyssey of Ed Ricketts, the Pioneering Ecologist Who Inspired John Steinbeck and Joseph Campbell is a biography of the man who was the inspiration for “Doc” in Steinbeck’s writings on Cannery Row.  Ricketts was the not formally trained but influential marine biologist who wrote Between Pacific Tides, the widely known text on intertidal zones.  His ecological and philosophical thoughts were way ahead of his time, and as the subtitle states, many of the ideas of Steinbeck and Campbell can be attributed to their association with Ricketts.