Have you noticed how birds become so round on cold days? During our latest snowstorm, I saw spherical birds sitting in the vine maple tree outside our window, taking turns at the sunflower seed and suet feeders. I posted a photo of a Varied Thrush on iNaturalist and noted that she was puffed up to keep warm. Someone commented, “What a borb!” I asked if he meant completely round, like an orb? He replied, “Exactly!” and sent a link to a long piece in Audubon magazine: www.audubon.org/news/whats-difference-between-borb-and-floof

If you’re like me, you aren’t following memes on social media and don’t have an account on Twitter or Reddit. That means I never knew that “birb” has been “affectionate internet speak for birds,” especially round ones, for years. It turns out that “borb” refers to the roundest birds.

If you use a down jacket on winter days, you experience first hand the superb insulation feathers provide. On the Smithsonian website, Peter Marra, head of the Smithsonian Migratory Bird Center at the National Zoo, explains, “Feathers are incredibly specialized structures that serve many purposes including, for many species, keeping them warm.” He says birds fluff up to trap air in their feathers, since the more air they trap, the better insulated they are. You may have seen birds standing on one leg in winter while tucking the other leg into their feathers to keep it warm. What I’ve never seen is something else Marra mentions— small birds, like our Black-capped Chickadees, “gather in large groups at night and crowd together in a small, tight space to share body heat.”

If you’re curious about the emerging fungus in our forests, Mushrooms of the Pacific Northwest by Steve Trudell and Joe Ammirati is an excellent resource. It’s organized by color of spores, and you may enjoy creating spore prints to aid in the identification of some of the mushrooms you encounter. It’s very easy to do, just cut the stem off a fresh mushroom and place it cap up on white paper in a dark cupboard, covering it with a bowl to keep out any breezes. It can be helpful to have a second mushroom of the same species that you can place on dark paper, in case the spores give a white print. Then lift the bowl the next day to see your spore print! If you’d rather enjoy some spectacular photos or learn about fungal guttation, this is fun. 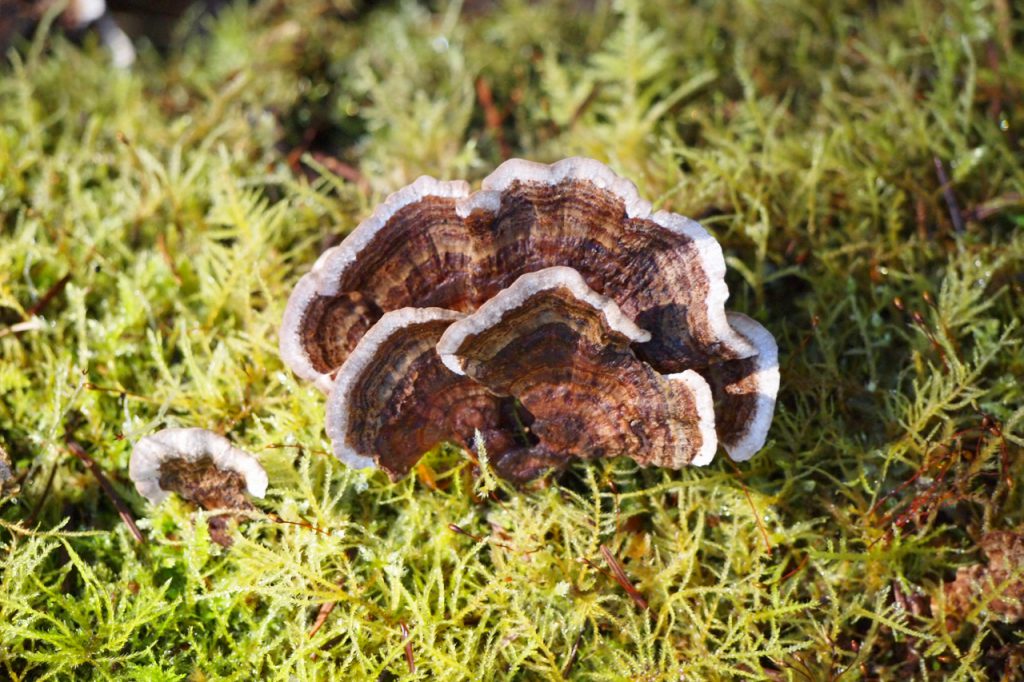 It’s September, and there are still mosquitoes. They tend to become inactive below 50º F. So, although we enjoy our mild Septembers, unfortunately, mosquitoes do as well. Fortunately, they don’t fly when there’s a brisk breeze, and Port Townsend is nearly the windiest location in western Washington.

Dragonfly species change with the seasons, each species peaking in numbers at different times from spring through fall. So, keep an eye out for these often brightly iridescent and conspicuous creatures, because, as with birds, the species composition changes with the month.

The same is true with our butterfly species, with their diversity at a peak in spring and summer. There are still some species flying in September, and even a couple that are actively flying as adults through fall and into winter.

As for yellowjackets, I’m not seeing them yet. Each colony starts the year from a single queen that overwinters. And that queen can only raise a very small number of future workers, because there wouldn’t be a colony yet to feed them. The first generation of the newly emerging ones can now go out foraging, which means the queen can now raise more young. When these mature, the queen can lay yet more eggs because there are more yellowjackets to feed the larvae. Positive feedback loop. Exponential growth.

From 2014 to 2016, the Land Trust participated in the Fisher Monitoring Program at various sites on the Quimper Peninsula, following protocol established by the National Park Service and the Washington Department of Fish and Wildlife. Fishers are in the weasel family, about the size of a domestic cat. They are highly energetic and eat a variety of prey, including rabbits, mountain beavers, and even porcupines; plus, fishers are eaten by other predators, i.e., they are mesopredators.

Although no fishers were photographed here, we did get many other animals attracted to the bait, such as opossums (146x), black bears (25x), coyotes (12x), dogs (9x), a raccoon (1x), Steller’s Jays (7x), Vultures (2x), and Ravens (2x).  A cougar, squirrels, and deer plus various birds were also photographed, but they were incidental to the baited tree. At each site, there was a motion-sensing camera placed 9-18ft from a tree with chicken bait plus lure and a triangular tunnel (called a cubby) that had brushes which could gather hair, allowing for individual identification of each animal via DNA.

This year on July 1, the Land Trust began the project again with two cameras each in the Snow Creek Forest, the Duckabush Riparian Forest, Valley View Forest, and one each in the Quimper Wildlife Corridor and at Chai-yahk-wh. At approximately 3-week intervals, the cameras will be checked until early September.

While we only have one species each of orca and elk in the Pacific NW, there are an estimated 245 described terrestrial slug and snail species sliming their way around here. Of these, there are a couple standouts one might see around the woods of Jefferson County.

The most dramatic and largest native Northwest snail is the Pacific sideband snail (Monadenia fidelis), with a shell diameter of 18-35 mm.  Its flattened, coil shell sports bands of black, chestnut, and yellow around its perimeter. You may find them in the forest, particularly after a good rain. Living under leaf litter, they munch away at fungi and decaying organic matter, emitting a smell when disturbed. Maybe this is why another common name is the rotten garlic snail.

Our second charismatic snail candidate is the Oregon forest snail (Allogona townsendiana). Another flat, helix-shelled snail, it shares the same moist environment and diet as the Pacific sideband. As detritivores, they serve an important function by converting decaying matter into soil, a task they performed quite well prior to the appearance of the common earthworm, which first appeared in North America in the 1600s with European colonization. More snails are listed as threatened, endangered, or extinct than all birds, mammals, reptiles, amphibians, and fish put together!